FITUA: Jurnal Studi Islam (P-ISSN 2721-186X), (E-ISSN 2721365X) is a journal Institution of the STIT Sunan Giri Bima of that discusses field, library and conceptual research from various scientific and Islamic topics. In this publication, Fitua contains writings on the reasoning of eco-feminism in the thought of inheritance law m. quraish shihab. Where is M. Quraish shihab's (hereinafter referred to as shihab) thought deserves to be appointed as a study target in relation to his views on gender equality. then there is a ushul fiqih study entitled a critical analysis of the ushuliyah lughawiyah principles of linguistic analysis (ushuliyah-lughawiyah) of a lafadz regarding the clarity and obscurity of a lafadz and the implications of its content. The clear category of lafadz (wudhuh) includes dzahir, nash, mufassar and muhkam while the unclear lafadz category (ghairu wudian al-dilalah) includes khafi, musykil, mujmal and mutysabih. Furthermore, there is an article on the impact of orientalist thinking in Indonesia during the colonial period (an analysis of the theory of orientalism, Edward W. Said). The Indonesian nation was colonized by the Dutch for 360 years. During that time, many things were done by the Dutch to Indonesia. The policies issued by the Dutch were heavily influenced by the advice given by their political advisors. 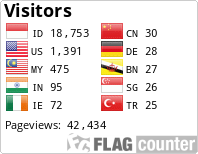